I love this story.

A homeless guy, in a beautiful white bathrobe, living under a bridge in the US gave a passer by a complete tour of his ‘digs’. 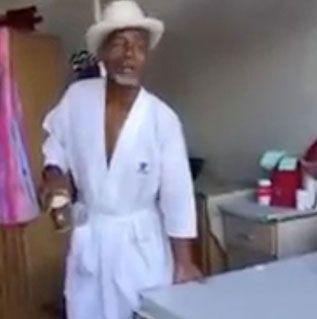 He was understandably proud of his home because firstly, he had his own ‘jacuzzi’.

This was made from a refrigerator that he put on its back.

He was also proud of the toilet – as he explained, ‘we’re near the sewer, so we just do our business in a bag, then chuck it in the sewer.’

He also had a closet – with an area for shoes for men and woman.

Then he the guest along into the living room where his brother Dave was chilling out.

He even had another guest bedroom for guests (like Dave) to sleep in, along with a snack cart full of goodie.

He wants to expand the home – of course – but he’s not sure what features he wants to add.

Decisions, decisions! But here’s the golden nugget for property investors.

He didn’t have a lot of resources, but he did have ‘resourcefulness’.

This one of the skills that Nhan Nguyen prizes most highly in property investors.

You see, he ran out of money early on his investing – but he didn’t want to stop building his portfolio.

So, he had to find a way to do deals without using any of his own money – and that’s what he did.

Now he’s done around 100 property transactions – all without any of his own money.

All through using a simple investing secret – almost anyone can use.