(Infographic) What do 7 Billion People Do All Day?

Did you know that Cleopatra’s reign was closer in time to the creation of the iPhone than to the building of the Pyramids?

They were built in the reign of previous pharaohs 2000+ years before her.

Of course, Cleopatra wouldn’t recognise or understand so much of what we take for granted in modern society.

But interestingly, she would have had a much greater understanding of the world 150 years ago.

It hadn’t changed that much. Horses and carts. Farming based economy. Royalty at the top taxing the people to fund wars and empire building.

The tech and industrial revolution have been true game changers.

Check out this…it’s a graphic of what people do all day now. 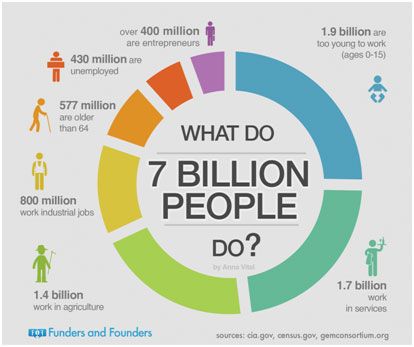 When you break down what we do Western society, it gets more complex than this image suggests.

I’m a “data infrastructure architect” …or a “poodle hair stylist and groomer’ or a ‘systems analyst’.

These were not jobs in Cleopatra’s era. Life was much more simple.

You were generally a slave, a farmer, or some sort of merchant or crafts person.

But really, after we moved on from hunting and gathering for the last few thousand years most people have been farmers.

But here’s a critical point.

We are now entering a new era where many of the jobs that we do now, will soon….NOT EXIST.

How many of those jobs will exist in 15 years with the rise of self-driving vehicles and robotics?

We are already seeing self-checkout taking jobs in our biggest employer in Australia…retail.

And, many of the jobs our kids will do in the future….DO NOT EXIST now.

That’s why as property investors, it’s so important to keep on upskilling ourselves.

Because our ability to build wealth through property now and in the future is dependent on having a steady income. (Preferably above average).

What new income-generating skills can you learn that are ‘future proof’…that will allow you to earn a good income…. now and in 10 years.

(That can’t be easily done by a Robot)

The reason I ask you this, is I want you to be financially resilient – and wealthy – in the new economy.

I’ll send you some resources soon to help you make this happen.

But here’s one important resource to get started – an event on how to set yourself up with a new income stream from property in the next 3 months.