5 Real Estate Secrets of the Richest Investor on this Planet

Warren Buffett is the richest investor on earth – with a net wealth of around $80 billion.

Now, we know him as a ‘share market guy’ – but what can we learn from him as real estate investors?

Well, Buffet has made two real estate investments that he talks about his in his annual letter to shareholders.

How did he work out whether this was a good deal?

He simply calculated how much crops the farm could produce, and the estimated value of them.

Through this he worked out the annual return on his investment to be about 10% per year.

(Why did he make such a small investment when he’s a billionaire? His son is crazy about farming, so Warren bought the farm for him to lease).

The yield on this property was about 10%. However some of the rents were not at ‘market rates’ – so he knew he could increase the yield.

In both cases, he was buying at ‘fire sale’ prices – after a bubble had burst.

Now, here’s some excerpts from his annual letter, summarising his lessons from these 2 investments.

Real Estate Investing ‘The Buffett Way’ in the Australian Market

One Local investor who follows Warren Buffett’s strategy of focussing on the ‘future earnings’ of an investment to calculate it’s value, is Helen Tarrant.

She looks for deals that will net her anywhere from 8%-11%….and this allows her to calculate the exact amount she will pay for the asset.

Because of this ‘cashflow first’ approach, she’s been able to build a portfolio that pays her an average of over $871 per day net passive income.

That’s money in her pocket after loan repayments and expenses (pre-tax).

If you want to discover more about how you can apply ‘Warrens rules’ to Real estate in Australia come along to her free webinar tonight. 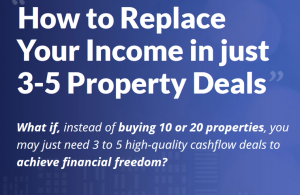