Amazon founder Jeff Bezos has sped ahead to become by far the richest person in modern history.

His net worth is about $202 billion Aussie dollars –$50 billion more than Bill Gates the 2nd richest person. 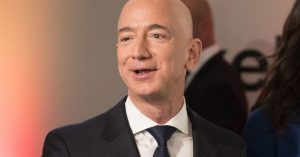 It’s the incredible wealth of Jeff Bezos and Amazon that allow them to do such an aggressive advertising campaign in Australia – and price cut against local big box retailers.

For example, in its first local ‘Amazon Prime Day’ it’s cutting prices on some products by as much as 70% – undercutting big names such as Woolworths, JB HiFi, Kmart and Baby Bunting.

Some of the niches with big savings include consumer electronics, kitchenware, baby goods, fashion, footwear, beauty, and toys.

And, you can even grab big specials in brand names like Puma, Nike, Tommy Hilfiger etc.

Why are they doing this? Simply, because they aim for domination in each market they enter – and they can afford to make no money for a long time as they build up their customer base, attracting eager punters like you and I to buy from them.

But of course, Jeff Bezos made his wealth being a wealth/value creator, not a consumer.

So, sure grab some specials on Amazon – but while you’re there have a think about what products you could sell on the Amazon store.

Because the great thing about Amazon is you can effectively partner with them to list your products on their online store…and showcase them to Amazon’s 100’s of millions of customers.

Then, they will store, pick, pack and send them to Amazon customers for you for an incredibly low cost. That’s why I say being an Amazon seller is the best.deal.ever.

Webinar Today: How to Partner with Amazon for Healthy Cashflow – Click Here

Big things are happening at Amazon

P.S It’s estimated 50% of all American households – the biggest consumer market in the world – have an Amazon Prime subscription.

And now Amazon Prime has launched in Australia and already membership numbers have exceeded Amazon’s expectations.

The Amazon express train is skyrocketing ahead. So is it time for you to jump onboard as a seller?

Get on board the Amazon Seller Express Train– Find out how to become an Amazon seller today. Click here for a free intro webinar.