Could this cause ‘Hyper Capital Growth’ in these cities

Recently a parliamentary committee took a good look at Elon Musks ‘Hyper Loop’ idea….as a way that we could travel from Sydney to Melbourne in less than an hour. 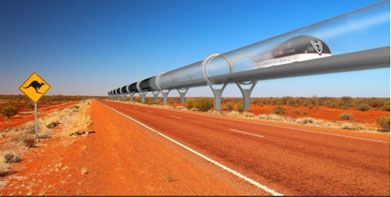 It’s basically a little space-age ‘pod’ that travels through a ‘tube’ at epic speed.

Designers say could fit 24 people in luxury class, 50 people in business class, and 90 in economy.

The big advantage over high-speed rail is apparently they run cheaply.

This concept could work even with only 10-15% occupancy, whereas if a high-speed train had that level of customers it would go under.

Because as the AFR notes….this would effectively bring cities like Newcastle and Wollongong within 30 minutes of Sydney CBD…

Ditto with Goldcoast to Brisbane, and Geelong to Melbourne.

The effect on price growth would be incredible….because proximity to good paying jobs is really where it’s at when it comes to predicting price growth.

After all, why else is someone paying $1.3 million for a piece of crap house 25 minutes from Sydney CBD?

Let’s hope and pray that our “Innovation” PM can get something done in this area….that would be like UTOPIA!

—–On another note, we’ve had a ‘gangbusters’ response to Deals on Fire.

Blown my mind….last I checked over 1,100 smart property investors have registered….

And we only launched a week ago. Incredible response, so thank you to all that have already secured your ticket.

If you want to see what’s all the buzz is about you can check out the event details here: