“Get in, get out, get paid’…with the least amount of work, money and risk.

He doesn’t assume the market will go up, when he’s doing a deal – in fact he makes sure his deals make money…even if the market goes down.

Click here to discover how to potentially make big chunks of money from small deals – with the least amount of work, money and risk  – FREE EVENT

Take this deal for example. He bought a house on a large block of land. 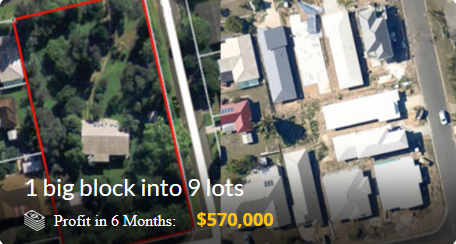 He then split the land up into 9 lots, and sold the land to investors and home buyers.

And he didn’t need to even speak to a builder to get this done – he just sold the land lots.

And the amazing part is…he often doesn’t use his own money to fund his deals.

Come and spend an evening with him in few days to find out how he does it.

But be quick, because the event starts in a few days, and there’s only a handful of spaces left.