The big benefit of doing small developments is you can potentially make a big chunk of money – in a relatively short period of time.

Now, the challenge is there is risks involved – and many people think it’s difficult.

But the truth is, it’s much easier than you’d ever imagined — when you know Nhan’s “fast track’ investing formula.

That’s because he’s able to make big money in small developments – without even speaking to a builder.

Take this project for example.

He bought a big block of land.

Split the land into 13 lots, and sold the land to new home buyers and investors.

Here’s his happy kids in front of the ‘for sale’ sign. They are happy because the project will pay for their next holiday! 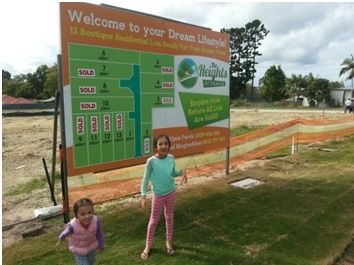 The project made around $850,000 profit in 9 months – some of which was split with Nhan’s partners in the deal….

But, as the driving force behind the deal he got to keep the lion’s share….

What difference would “wealth-windfall” like this make to your life?

Want to learn how to do deals like this?