(Photo) Does this look safe to you?

This picture was recently taken in China.

Some guy has put a bit to much stuff on his truck, so it’s lost it’s centre of gravity and started tilting – quite dangerously. 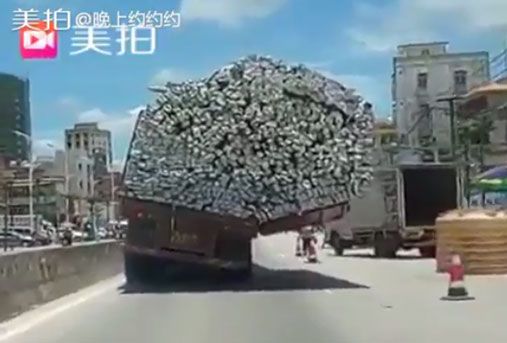 Reminds me of how Nhan Nguyen invested when he was younger.

He would gear up the hilt to buy properties.

And, it worked to a point…he was able to buy dozens of properties.

But the GFC gave him a ‘’wakeup call.”

He was doing a project that was expected to make him as much $1million bucks – a big sub-division.

Then the market turned, and no one seemed to want to buy the properties in his development.

In the end they reduced prices and sold them all.

And there were many sleepless nights and stressful days worrying about things not working out.

Since then Nhan has adopted a safety first approach to investing

• Very conservative use of debt to fund projects

• And the properties he keeps in his portfolio have very small loans, so they have very little risk – and they gush cashflow

Sure he could make more money by borrowing more – but he wants to sleep soundly at night – and never risk everything he’s ever worked for.

This is especially important if you’re within 15 years of your retirement, because it’s almost impossible to rebuild after a big loss at that age.

To find out more about this ‘’safety first” approach to investing, join Nhan for a webinar tonight.