Who then says the classic line ‘That’s not a knife. This is a knife’. 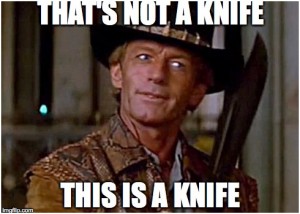 Anyway, a similar thing has happened with property booms.

This has been fuelled by its status as China’s ‘Silicon Valley’- there are lots of high paying jobs there.

In fact, prices are so high that sellers were recently refusing to hand over title deeds to the new owners.

They would prefer to pay the penalty of 20% of the purchase price, rather than hand over the property.

And with prices rising that fast, from a financial point of view, this probably made sense.

This makes even Sydney’s huge price rise look a little modest in comparison – although Sydney has risen by a similar amount – it’s just taken 3 years instead of one year.

The question is though – where will the next ‘’Sydney” be? Where can you invest in over the next 3 years for the strongest capital growth potential?

Click here to find out at this new property training event.