The “Hidden Secret” to Double Your Income

Archimedes said ‘Give me a lever large enough and I can move the world’.

But what is leverage?

Leverage is all about using a small thing to move a big thing.

And, ‘leverage’ is the force that could potentially double or triple your income at record speed.

AirBnB is the world’s largest ‘hotel’… and they don’t own any rooms to let.

Uber is the world’s biggest taxi company… and they don’t own any taxis.

Amazon is the world’s largest bookstore… and they don’t publish any books.

These three huge companies provide the “digital service” that links consumers with sellers via the internet.

And, there’s massive leverage for them in that.

They get all the benefits of having 100’s of millions of customers – but without how the huge costs of owning fleets of cars or hotels etc.

And as they get bigger, they create “infrastructure” that gives them even more power – and creates barriers to entry for all their competitors.

They are almost unbeatable economic forces.

But, here’s the twist.

What if YOU could leverage THEM?

What if you could leverage all the time and effort and MONEY they put into developing their technology?

What if you could leverage the leveragers?

That’s what this new webinar is about.

How to ‘piggy back’ on Airbnb to potentially double or even triple your current monthly income. 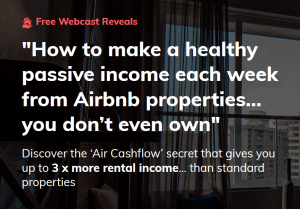