Harry Trigaboff came to Australia as a migrant from a Russian community in China in 1948.

He had a humble start – driving a taxi and delivering newspapers.

But, it wasn’t’ long before he had saved enough to do first small apartment project in Sydney – and he’s never looked back.

In fact, now he’s overseen the construction of almost 60,000 apartments across Australia. 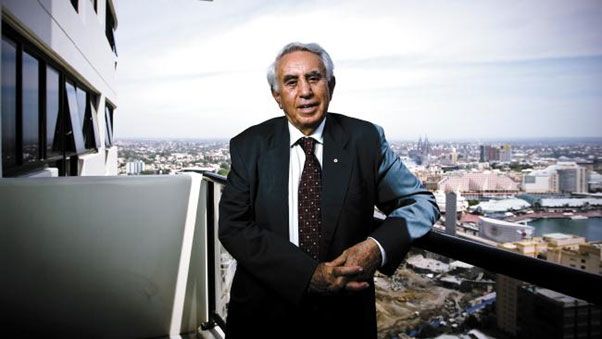 He started off with affordable apartments, but nowadays he’s more focussed on the ‘luxury end’ of the market.

The reason for this is he has a big vision for a big Australia:

“Australia’s population may grow to maybe 55 million… I’d like to see 100 million, because I believe we will have many things to do here besides drilling holes and selling coal” he says.

In the 1960’s the ANZ Bank threatened to close Harry down, and since then he’s built his empire up as much as possible without bank debt.

Nowadays, he mainly funds his developments with ‘cash reserves’ rather than bank financing in order to grow – and he’s not short of cash

His business bought in $1.2 billion from apartment sales, and managing serviced apartments.

Nhan Nguyen, had a similar scare in the GFC.

He was projecting to make $1million+ from a project.

But he ended up having trouble selling the properties in project because the buyers kept falling through.

They ended up selling the properties at a discounted price – and the project profit was only around $200,000.

And now, like Harry, he’s a lot more cautious about debt.

In fact, he now follows a similar strategy to Harry.

You see, Harry has kept over 3,000 dwellings as ‘debt free’ assets, which his company collects the passive income on.

Nhan does the same – keeping townhouses etc. from every project he does, and living off the debt-free income.

That’s as much as $1.2 million passive income per week!

If you’d like to learn how Nhan acquires townhouses etc. often using none of his own money…