This is “Save our Suburbs” on Steroids!

Maybe you’ve got a ‘save our suburbs’ group in your area.

It’s a group of concerned citizens who fight inappropriate development in their area.

My uncle is really involved with this group. He’s fighting off new developments in the leafy Eastern suburbs of Melbourne.

So much so, he even buys neighbouring houses to save them from the dreaded units.

And, he spends countless hours in VCAT giving evidence against certain developments.

And, look it’s an emotional issue.

One guy even took a council zoning dispute to the next level. He turned this tractor into a tank, and tried to knock down the Mayor’s office! 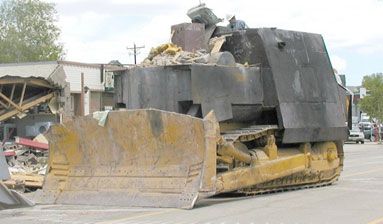 My take is that, in-fill developments in established suburbs are generally positive for a few reasons.

Whereas in new suburbs all amenities and support services (hospitals etc.) have to be built new.

This is also very expensive for the tax payer – although developers do fund a certain amount of the cost.

Secondly, people who live in these new developments often get public transport to work – because they are close to the city.

Also, they don’t accumulate a lot of ‘stuff’ because the dwelling space is often more ‘compact’.

This is why citizens of Manhattan for example have a surprisingly low environmental impact.

And there are lots of other positives as well – more people per square metre of land due to ‘building up’ etc.

I do understand no one likes increased congestion – so that’s a negative, and there are plenty of other challenges too, but overall, I am a fan.

Now, my views, give myself and my uncle the opportunity for a ‘robust discussion’ at family barbeques….

But here’s another twist to the whole story. The reason my uncle is able to contribute so much time, energy and money to ‘saving our suburbs’….

Is because he made a fortune sub-dividing former farm land in the outer South East of Melbourne into 300 lots!

Whether it’s townhouses, houses, or even apartments….you’ll discover the secrets of Small Developments Made Easy.

Yes, I want to discover the secrets of Small Developments Made Easy – CLICK HERE

And I’d hate for you to miss out, because you’ll get investment ideas, that you won’t hear anywhere else.